Skip to content
Effect Of Virus On Android Phone – Often the general public defines errors made by the android system after update or modified said it was caused as a virus. At this time the virus on the android is still difficult to attack smartphones, why? because to access a feature on android required permission from android users. Even to make modifications to the system required super user access which means the Smartphone must be in the root first.
Unlike the virus in Windows which very dangerous for users because the program can directly manipulate the system by using malware or steal data with spyware. The virus that is considered and most common in android is Adware which is basically not a virus but an advertisement. Sometimes the advertisement is not user-friendly, especially advertisers on the app brutally display ads to users and maybe have very harmful effects. This is the cause and source of all the problems that are often considered viruses on android. 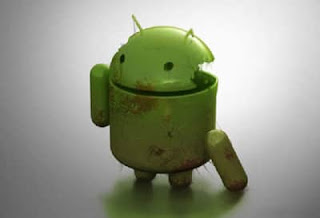 Android is lag or feel slow when used can also be caused by the Android Virus. Because the virus causes app also using RAM to run that program. For those of you who experience android laggy even though you only have not much application refer to the following tutorial.

Internet that is not as stable or slow to load a content on the website, downloading upload file or when you are using YouTube bias is also caused by Virus. More precisely Adware, where internet connections are used inefficiently wich mean the Internet downloads useless content such as ads on applications that have adware properties or brute ad dealers. In addition, your Internet data usage quota will also run out faster due to the activity of ad serving.

The use of excessive RAM that causes a slow effect does not only affect the performance of the Smartphone. Worse things can happen like Android is fast Overheating because of the useless RAM usage and coupled with the Android Batrai quickly runs out because it will use a lot of power to run some applications stay on.

Memory Full when have low installed application is also often experienced by many people, this itself is often found. Generally an adware application uses the user’s intent to press the button that allows the program to download an other application. So unnoticed Internal memory users are full of useless ads produc apps.

Actually, in case of a virus with a destructive severity yet, it is usually the source of a problem with an adware that always installs applications from the advertiser without considering whether the application is compatible with the user’s device causing a crash between the device and the application the effect of that will be Application stop or Foorce Close.

Usually this is due to an intruder application, the application is Antivirus or similar System Security. Not all antivirus applications on android running properly, sometimes there is also an antivirus that just a hoax which mean it is a Fake Virus. Instead of detecting Viruses and deleting the correct viruses only cause trouble delete important data for users who are considered Junk files by such applications such as Photo, Music, Video, Documents, Game Data etc.

Similarly, the case of Force Close but with a severity that is more than the ascend Force Close. Where the user’s device is not able to Boot so it only looping and repeats the Android logo, which mean user cant access Smartphone Normaly but still have cahance to access Recovery Mode.

Severity level is more dangerous than Softbrick where in Hardbrick positions may be Hardware Smartphone users also become victims because it was not immediately fixed initially. Forced to always work with the not good condition of the android device will only aggravate hardware.
Then how to overcome the virus that attacks android? in addition because virus, error on the system can also be overcome by using the following tutorial: Tips Overcoming Android Affected by Virus.