Skip to content
Homepage / How To Move Obb Files To Sd Card With Rooting Android
Android without games is like rice without a side dish, now Games are more often played on Android than any other appointment. This is because many Game Developers from other board types such as PC Game Developer, PSP, PS1, PS2, PS3, PS4 and other types are also interested in developing games on Android. That’s what causes the android game is currently experiencing a very rapid increase. How not Developer android games can make money from AdMob that show ads on the android game.
Almost everyone has Mobile, the most widely used HP today is a very effective android and has many features as well as relatively affordable prices. This type of smartphone is now experiencing a pretty good development, with applications developed by the Devloper App then this game can play using PS2 PS2 PSP Game Emulator and berbegai other types of games. But not everyone has enough money to buy a Smartphone with System Requirement is good enough, so it needs some way to outsmart it. One of the problems often encountered by Android games is the lack of memory capacity to play games. Especially HD games that certainly require the capacity of the Internal Elementary course which is very much.
Usually that requires a large internal memory capacity is Data Obb on Android games. The lack of internal memory on android makes me to make tutorial how to overcome the lack of internal memory on android, that is by moving Obb data on the game to SD Card External. This Tutorial you can follow for all android version like marshmallow, lollipop.

How to Use Foldermount Apk Android: 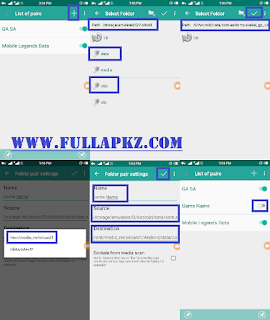 Game data successfully moved to SD Card External, usually even if you have activated feature where MountFolder will be active when you do Reboot Android by itself better check FolderMount first to ensure obb data link is reactivated after turn off or reset android before playing game.