Skip to content
Homepage / What Causes Android Apps to Force Close / Crashing / Unfortunately Stop
Force Close, Crashing and Unfortunately Stop is common issues to android user who had problems on their android apps. Maybe not all things in this post will solve problems for you, because sometime the problem is not on the app but sometime Apps is not compatible with the device. Apps that not compatible with the device can not be bargained to run it on your smartphone. There is only one last hope in facing the compatibility of a app you can mod that app or use third-party app but it will requires knowledge in app modifications. Easy way is change your device or ask app developer to make it can run on your device.

A. Application Permissions Not Yet Checked (Setting For Android version Marshmallow and Up)

There may be some apps or games that directly permit application to be checked automatically on our device. There are also some games that must be done manually, for example is Gangstar Vegas.
The location of app permissions is in Settings > App Manager > Game Name or Application.
What Causes FC Game Android And “How To Solve It”.
“In the application / manager settings (Place where you want to Uninstall the app)
> The location of App Permissions can be Different, but still in around here <- 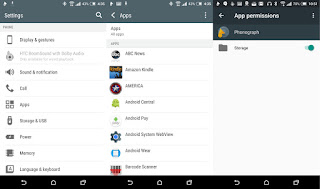 I include Screenshot because this seems to be one of the most common causes of FC games experienced by users with Marshmallow OS devices and up.

C. Because Do not know the default storage of the device.

For example Smartfren or Lenovo android device, The Default Setting Storage can be changed to Sd Card. So of course it cause the game will FC / ask for download because the data that should be in Sd card not in Internal Or reverse.

a. Because The Device Specifications Are Too Low to Play The Game

Yes, you can play with laggy and bad graphics low setting, This happen when you play HD android game with Low Spec Android. Not only cause game laggy your Android Hardware also can be Brick if you force it to play. Low Spec Android cause game some time will Force Close suddenly, this will makes a loss player when playing game. To solve this you should buy new android device with high System Specification.

This is actually a lot of examples but the most delicious for example is Tintin game, although not FC. May be the App Developer only build for specific Android Device, not for all Smartphone. You can contact directly App Developer to make it compatible with your Device Model and Type. This is already policy some developer make an app only for specific Android and not create it for Public.

There are many real examples. The impact of this GPU not only cause FC, some time graphics be error colored, eg white / pinks / blue screen. You can Play because this problem is still can solve with GLTools, GLTools allow you modification android device GPU. Need root permission, but this not good to use because your GPU actualy not support for this game. If you force it to play it will be dangerous for your phone.

d. Due to the Problem of Unsuitable Resolution

An example is the Starfront Collision game. This game will be FC if it is not within the 480×800 resolution range. Still can overcome by Game Tunner or Second Screen.

e. Because Not Support Android Version

Usually happen when old game played in Lollipop OS and up. For example game Eternal Legacy v1.0.0 working perfectly once play this game on Kitkat Android Version. But when User Upgrade back to Marshmallow game will FC. API version also influence compatibility on some android game.